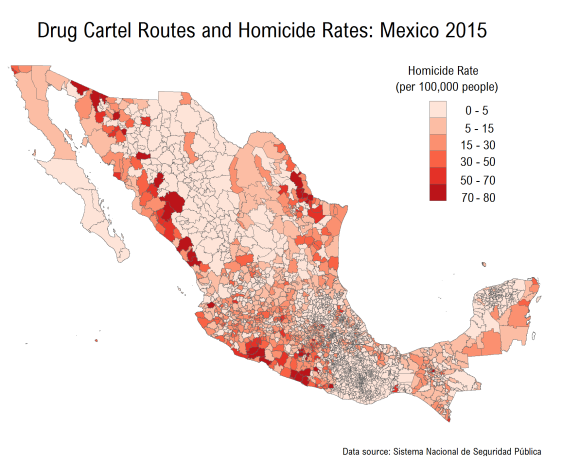 Homicides are one of the most violent manifestations of breakups in the social structure. While not all homicides are intentional, many are and these are the focus of this analysis.

Homicides respond to different dynamics and forces, in Mexico, many of these respond to drug cartel pressures. This can be seen in the map above -which plots homicide rates in each  municipality (2456) for 2015. Murder rates are palpably higher in three areas well known to be linked to drug trafficking: two related to the US border and one in the central Pacific region (a spot through which precursors for manufacturing of synthetic drugs come into the country from Asia, mainly from China).

Homicide rates tend to be higher in regions disputed by more than one cartel. This why the policy to militarily dissolve the cartels often leads to spirals of violence. This approach destabilizes the long term equilibrium  of territorial distribution by weakening incumbent cartels. As a consequence of this,  new groups emerge and contest the domain of a particular region.

This is one reason that explains why the approach to drugs that the Mexican government decided to follow ten years ago has fatally failed. This failure can be measured in a number of ways: by the number of lives lost; the loss of economic opportunities; forced migration; budget devoted to the military and security rather than to socially valuable public goods, and so on. Under no metric does the social benefits brought by this strategy surpass its enormous social costs.

In the meantime, many countries have made strong steps to revert their policies towards more flexible drug production and consumption laws to treat the matter exclusively as a public health issue while taxing its consumption. There should be no doubt that the prohibitionist approach to drugs has been unequally enforced in different parts of the world. However, this gives more freedom to Mexico for reflecting about where it’s going and which path it wants to take in the future.