Many migrations are temporal, a fact that is often ignored in both the public discourse and the economic literature on migration. Such omission is serious as temporariness of migration affects almost every aspect of immigrants’ life cycle decisions as well as the composition of the remaining migrant population. Failure to include temporal migration into consideration will likely drive to fallacious conclusions due to the dimensions of the phenomenon. A recent OECD report points that, depending on the country and time frame studied, 20 to 50 percent of immigrants leave the host country within the first five years after arrival.[1]

Before proceeding to the topic of temporal migration, let’s step back to distinguish migrants by reason of migration. One can claim that immigration occurs for two reasons: driven by economic motives or by the necessity to escape the country of origin.  Despite increased attention to the second type of migrants, which we shall call refugees, most migrants move from their country of origin for economic motives. Because of this, this analysis will centre in the kind of immigrants who choose to move in search of a job, escape poverty, gain a set of skills they find valuable and so on. Conceptually these two types of migration are very different. Here I shall attempt to elucidate some of the features that make temporal, economic driven migrants so different.

Outmigration in not consequence free. One obvious implication regards the selection of migrants and thus the composition of migrants. That is, migrants who decide to stay are more likely to be similar across them than across those who decide to migrate (on average, at least). Then, one important question is which immigrants return and which migrants stay. To put it differently, are migrants positively or negatively selected? This will depend mainly (while not exclusively) on two main features: before migration skills and re-emigration plans. Of course, plans and ex-post realizations often differ. However, choices made during the stay of migration are largely determined by the expectation of the temporariness of their migration. Moreover, it has been found that expected migration length and actual duration realization is not very different.

Empirical literature has found that intended duration of migration affects assimilation efforts and consumption patterns which in turn affects employment outcomes too. By assimilation efforts one can think of willingness to learn a language, efforts to extend social network, investment in valuable local skills and so on. For example,  Christian Dustmann has shown that those with non-permanent intentions to stay do invest less in language capital, as opposed to permanent migrants.[2] It is not hard to see how assimilation profiles is correlated with employment prospects and thus earnings growth. 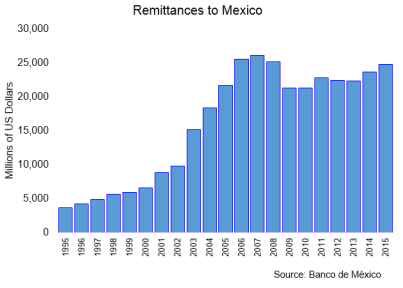 Arguably, the most important channel by which migration affects the sending country is via remittances (or transfers from the immigration country to the immigrant’s home country). For example, according to Mexico’s central bank (see figure), reported Mexicans overseas sent nearly $24.8 billion home in 2015, overtaking oil revenues for the first time as a source of foreign income.

Migration can have negative effects for the sending country too. One obvious channel is via the brain drain effect. That is, by a reduction in the per capita human capital in the home country. However, this can be mitigated and even reversed by returning migrants if their gained skills abroad are highly valued in the country of origin. On the other hand, temporary migrants tend to spend their most productive years in the host country, while spending costly childhood and retirement years in the country of origin. This effect is opposite for the receiving country, as the high fiscal burden that aging brings about is borne by the country in which migrants settle for retirement. It is estimated that average annual social expenditure for working-age population, in OECD countries, is twice as high for children and six times as high for individuals over 65.

Why temporal migration occurs introduces additional complexities to the analysis. One can think of circular migrations, as is often the case with Mexican agricultural migrants in the United States, student migrations, or migrants who wish to save for later investments in their home countries. However, in almost every case in which the decision to re-emigrate is made endogenously by the migrant and is free of unexpected shocks, the reason falls back to an intrinsic preference for their home country or to a high return for the skills acquired during migration in the country of origin. Intuitively, the decision revolves around the trade-off a migrant faces between the benefits of staying longer and the loss of foregone utility from spending additional time in the host country.

Implications of temporary versus permanent migrations follow directly from the behavioural consequences between the two types and to selection of out-migration. Temporary migrants may invest less in social and human capital, having potentially large consequences for their assimilation and earnings profile. Temporary migrations are also likely to affect wages and employment of natives in destination countries differently for permanent migrations, how this occurs will depend on who emigrates, and where emigrants are located along the native skill and wage distribution. Of course each case will vary in both the time and space dimension for which any attempt to make universal conclusions needs to be taken with caution. Here I attempt to stress the fact that return migration is perhaps a norm rather than an exception a fact that conveys large consequences for both the sending and receiving countries.

[3] Dustmann and Gorlach (2015). “The Economics of Temporary Migrations.” Journal of Economic Literature (forthcoming).

Demography has uninterruptedly changed the course of human history. From the diaspora that led the formation of Ancient Greece to the aging populations of Japan and Europe. However, it is possible to assert that the speed of the demographic changes that North America has been going through is unprecedented.

The biggest change in this respect has been migration from the southern countries of Latin America to northern ones, particularly the United States. Not surprisingly, a large proportion of them come from Mexico since it accounts for over 30% of the Spanish speaking population in the Americas and shares a 3,145 km (1,954 mi) border with the United States, in many respects the most dynamic border in the world.

In fact, about one in ten Mexican citizens, 12m in total, live in the United States and despite ugly and divisive yet apparently fashionable political rhetoric half of them are legal and documented migrants. This makes for the biggest immigrant community in the world.

Has this migration come to a reach a new equilibrium? Between 1995 and 2000 some 3m Mexicans moved to the United States, vastly outnumbering the 700,000 or so who returned to Mexico. Yet in 2005-10 the number of newcomers fell to 1.4m, whereas that of returners increased to a matching 1.4m. Some estimates report that current net migration between these two countries has reversed. Much of this is likely to be the result of scarcer job prospects in the US, but not all.

Still, every year around 900,000 United States born citizens with Latin American heritage reach voting age. The effects of past migration are inevitable. The map that follows should help you visualize the size of the phenomenon.

It is not uncommon that people find a connection between the previews map and that of the mid 19th century before the territorial disputes between the United States and Mexico that were settled between 1845 and 1848 to favor the rising US power. The map to the right plots the Mexican territory as claimed by Mexico.